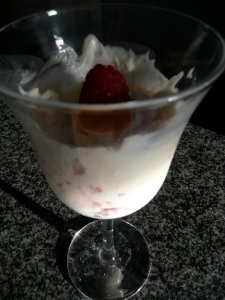 It was really hot, too hot to cook, let alone bake! Too hot for ice cream even (yes, that really is possible), so what to serve for dessert? I decided on a raspberry and lemon mess. To be fair, the recipe I found in my recent copy of GoodFood stated blackberries, but my fridge content decided otherwise. I still had meringues left, so this became a quick and easy refreshing dessert!

For 6 large portions, tip 600 ml whipping cream into a large bowl, add 3 tbsp icing sugar and whip until soft peaks that hold their shape (whipping cream takes longer than whipping egg whites – make sure the cream is coming straight from the fridge, you can only whip it when cold). You can do this beforehand and chill the whipped cream until ready to serve.

To serve, dollop 6 tbsp lemon curd over the whipped cream (tip: put the lemon curd in the fridge beforehand, so your dessert stays cool), crumble over some meringues (so easy to make, or just use the shop bought version), scatter over 200 g raspberries (or use blackberries, strawberries or mixed berries instead). Fold together with a large spatula or spoon, just a few times to marble everything through. As the name suggest, it can look messy! Divide between 6 glassed and decorate with some leftover berries. Enjoy while listening to Hot Hot Hot by Buster Poindexter. 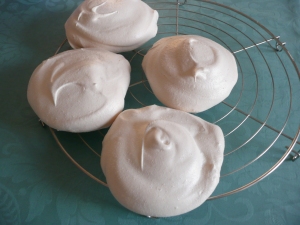 Although I’m not a huge fan of overly sweet desserts, I do like the versatility of meringue. There are two types of this sugary delight: the French version, that is crumbly and baked all the way through, and the Italian version, still gooey in the middle. Maybe it’s due to my Erasmus stay in Italy, but I’m definitely a fan of the latter So this recipe is clearly of the gooey kind! A lot of people are a bit daunted by meringue, but it’s really easy to make and this is definitely a foolproof recipe, so don’t hesitate to try it!

Heat the oven to 100 C and line a baking sheet with baking parchment. Mix 2 egg whites to stiff peaks (egg whites freeze really well – if you have some in the freezer, just defrost completely first). Add a pinch of salt, this will make the mixing easier. You really need to be able to turn the bowl upside down. When stiff, add half of 140 g caster sugar and mix again until glossy. Now add the other half, as well as 1 tsp cornflour and 1/2 tsp white wine vinegar and beat back to shiny and stiff. The cornflour really is the magic ingredient here: it will make sure your egg white doesn’t move in the oven! Dollop 5 very large spoonfuls on a baking sheet (thanks to the cornflour, they won’t spread much and will keep their height) and bake on a low shelf for 1 hour until crisp on the outside. The meringues should peal easily from the paper. Transfer to a wire rack and allow to cool. Enjoy while listening to Mambo Italiano in the version of El Tatoo Del Tigre.

Use up your meringue by crumbling it over ice cream or strawberries.

When some friends came to dinner a while ago, they didn’t want to arrive empty handed. Usually, you bring a bottle of wine, but as I’m not a big fan of wine at all, they wanted to bring something else. So they went to a cookery store and said to the lady behind the counter: we need a present for someone who loves to cook but already has everything. The lady knew just the thing, and that’s how I got my own Lékué macaroon set including a macaroon mat and silicone piping equipment. I already had the cutest cookbook on macaroons as well, the French book Les secrets du patissier: le macaron. I’ll admit, I mainly bought it for the gorgeous cover and the beautiful pictures, but it’s a fantastic book that helps you overcome your fear of tackling a macaroon recipe. So now, I only needed a good occasion which came about yesterday as we were invited to dinner by some friends. They have 2 little kids, so I assumed they would prefer sugar over wine too!

I opted for a batch of vanilla macaroons and a batch of raspberry macaroons, but the basic recipe is really the same. For 20 macaroons, first sieve 100 g almond powder and 100 g icing sugar in a bowl, stir to combine and set aside. Now make the meringue. You have 2 options here, either you make a French meringue where you first mix your egg whites until stiff and then add the sugar and mix again (the easy version) or you opt for an Italian meringue, where you add a hot sugar syrup to your stiff egg whites. This is more difficult to achieve, but your macaroons can’t fail with the Italian version, whereas for the French one all depends on the precision of the rest of your actions. On my first set of macaroons a year ago, I used the French version and got hollow macaroons as a result, so this time I didn’t want to take any chances and tried the Italian meringue instead.

For both versions, first mix 40 g egg whites until stiff (add a pinch of salt to speed this up) – you’ll need 80 g egg white which is about 4-5 eggs (egg white freezes really well, so when you only need the yolk for a recipe, like for bavarois for example, just put the whites in a freezer bag). For the French version, add 100 g caster sugar in batches and keep beating until incorporated. For the Italian version, put the sugar in a small pan with 40 ml water and gently heat without stirring until the sugar is dissolved. Turn up the heat and boil for 8 to 10 min until the syrup reaches 115 C (you can measure this with a sugar thermometer. If you don’t have one, just boil the mixture until it starts getting syrupy and starts to thicken, you need something like a runny shower gel consistency). Gradually pour the syrup on the egg whites and keep beating all the time. Continue to mix for about 10 min to cool down the mixture a bit. The result should be a glossy mix which holds it’s shape.

Now add 40 g raw egg white to your sugar almond mix and stir until well combined and you get a thick paste. This is were the two types start to differ: for vanilla macaroons, add the seeds of 1/2 vanilla pod or 1 tsp vanilla extract. For the raspberry version, add a few drops of red food colouring (optional). Stir until completely combined (it’s a great work-out for your arms). Add 1/3 of your stiff egg whites to this and stir well to loosen the mix. Now add the rest of the egg whites and gently spoon through until it’s fully combined. Put the mixture into a piping bag and pipe small circles on a baking sheet. Leave to stand for at least 30 min (this is a very important step: by doing so, the top will harden a bit and will rise uniformly in the oven which means the macaroons won’t crack).

For the vanilla macaroons, I opted for a vanilla buttercream filling. For this, mix 125 g softened butter with 70 g icing sugar, 80 g almond powder and 1/2 tsp vanilla extract. For the raspberry macaroons, I used shop bought raspberry jam (the recipe indicates how to make your own, but that’s where I drew the line). Put in a nice box for a great present or store in an airtight tin for yourself. They are best eaten on the day or the day after, but they will keep for a couple of days. Enjoy!

Get the RSS feed